Community Service includes those activities in which Rotarians make substantial and lasting improvements in the quality of life of their community.

Moraga Rotary has made a commitment to improving our community and our world.  We do so by raising money to provide magazines and books, supplies, shelter, and meals, and by using our hands to build play-sets and complete playgrounds, make Christmas stockings, paint maps, pull weeds, and participate in events that provide opportunities for the children in our community to have fun as well as learn.

Our thanks is the smile on a child's face, the thank you from a parent, and the handshake or hug from someone in need who has been helped by our contributions or our hands-on labor.

This year and in the past we have supported these local projects:

The following are highlights of some of the past projects that Moraga Rotary has participated in. The list is far from complete and gives examples of the types of projects the Club takes on for the community.

In 2015, the Moraga Rotary Board began planning for a 50th Club Anniversary gift to give to the Town of Moraga.  We had given to the Town the two trains and train station at the Rancho Laguna and Commons parks in prior years, but the Club wanted a larger gift for this milestone anniversary.  Research began on all-access play structures, and the dream gift began to take shape.

Fundraising began, and by the 2017 anniversary, over $340,000 were raised and site work began on the large playground.  Many town service organizations turned out for the construction over many weeks.  The site was officially opened in January, 2018, to delight of hundreds of children.  It is today, the most heavily used playground in Moraga. 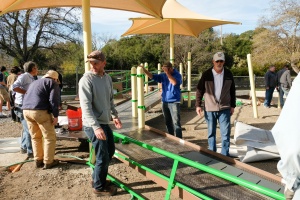 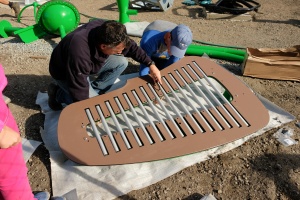 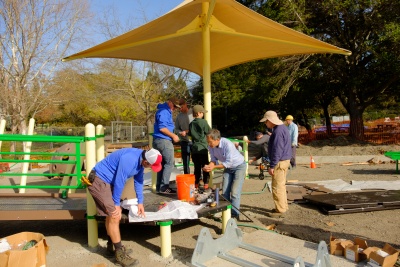 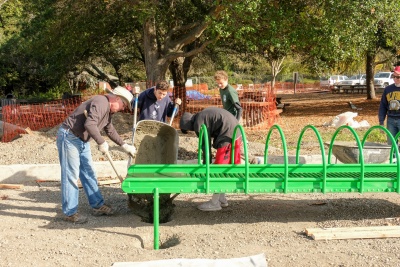 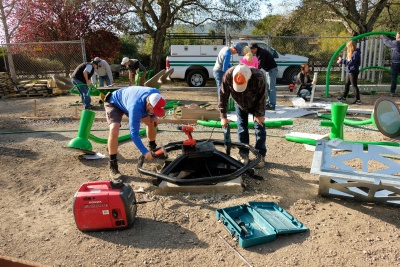 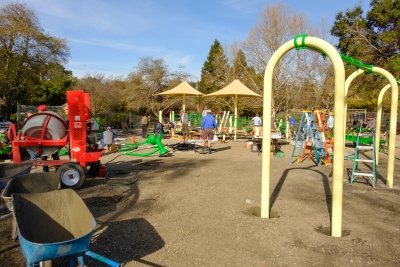 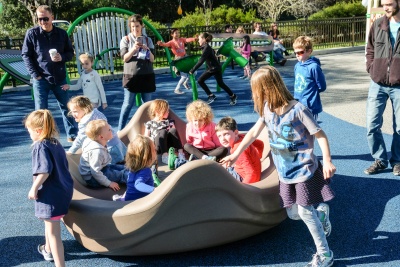 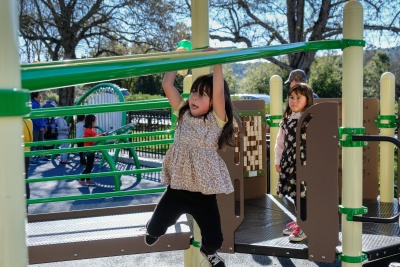 The Town of Moraga received a grant to replace the upper commons wooden play structure that was perfectly good but had rotted wooden posts below ground level.  But the funds were not enough to pay for the disassembly and removal of the structure.  The Parks & Recreation department called Moraga Rotary for help. 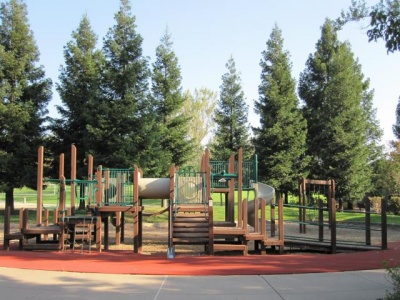 As it turned out, Moraga Rotary has recycled old play structures by carefully removing them, documenting instructions for reassembly, and then shipping them to other Rotary clubs that replace broken parts, repaint and install them like new for free in some needy community.

On a crisp November weekend, members of Moraga and Orinda Rotary clubs, supported by Boy Scout Troop 246 and St. Mary's Rotaractors, began the disassembly and palletizing project using jack hammers, saws and hand tools. Part of the project was disposing of the heavy mat material around the structure. 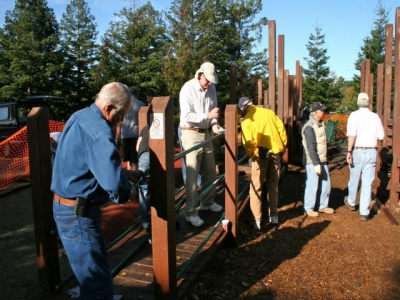 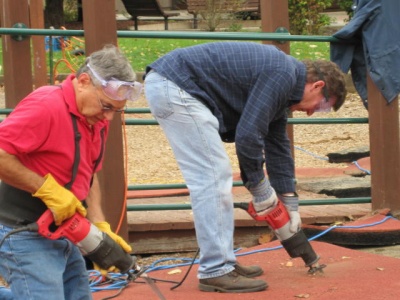 The disassembly activity was also the Eagle Scout project of Odyssey of the Mind team member Colton Jang, who drew the reassembly drawings in Spanish, numbered and photographed all the pieces, and directed his troop members. 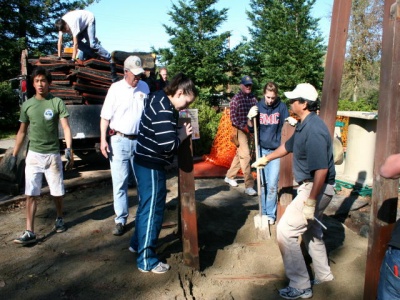 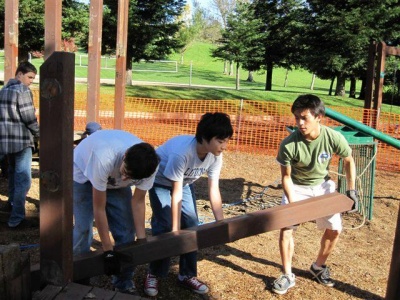 By mid-afternoon, all the equipment had been removed, palletized and banded.  Rotary leader Gary Irwin had previously communicated with Rolando Chavez from the Rotary Club of Montemorelos, Mexico, whose club had just built a neighborhood park but had no funds for a playground.  Moraga Rotary funded shipping the equipment, and the Montemorelos Rotary Club received and refurbish the Moraga Commons equipment, and installed it as a gift to their community. 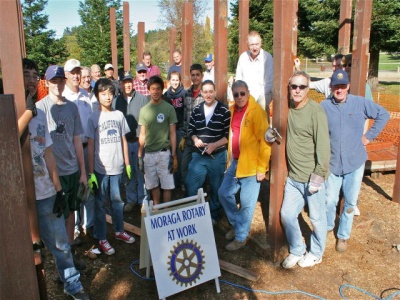 A tremendous team effort for an international community service project, benefiting the children of Moraga and Montemorelos, Mexico.

From Dictionaries on to Magazines for Kids:

Each year in the past, Moraga Rotary gave every third grade student in the Moraga School District, Saklan School and Canyon School a hard-bound dictionary to keep for life.  It was part of our commitment to support the education of children to make them better citizens of the world.

With the advent of internet access reaching down even to 3rd graders, the need for a large hard-bound book became less and less.  So working with the teachers and school staffs, Moraga Rotary provided 640 weekly magazine subscriptions to Time for Kids and National Geographic Explorer for every 3rd, 4th and 5th grade student in the Moraga and Canyon schools for many years. 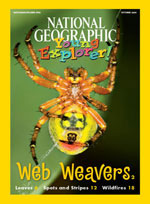 Teachers have told us that they looked forward to the new magazines each week, building homework and study assignments that engage the students while learning about the world around them.

We then broadened this effort to include 3rd grade children in St. Anthony's School in Oakland.  A goal, and a commitment from Moraga Rotary.

On an overcast day in October, Moraga Rotarians and members of the Miramonte and Campolindo Interact Clubs came together at Rancho Laguna park in Moraga to build a playground train and train station.  The playground equipment was a gift to the children and community of Moraga to recognize the 100th anniversary of Rotary International. 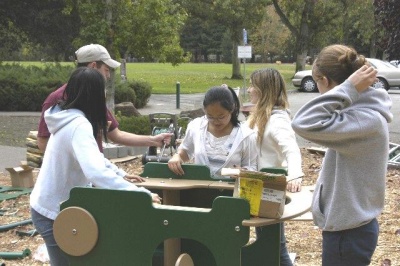 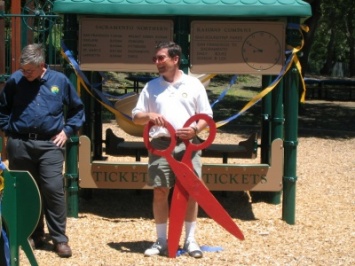 The train station came complete with a real schedule, and by the hands on the clock, the train is on time.  A great deal of effort was made to provide a sense of history by researching the original train station in Moraga where OSH once stood.  A large sign with a photo tells the history when trains ran through Moraga.

Playground Maps of the United States:

As part of the ongoing commitment to the children of our community, Moraga Rotary embarks on projects that improve the schools here in Moraga.  A request came to us from a Donald Rheem Elementary school teacher, who had a class project that studies the history of the United States by "traveling" through each state, and studying it's history and the contribution it makes to our country.

The teacher thought it would be a great idea to have a map of the United States painted on the school grounds, so the students could have the visual impact of a large map. With the support of the Moraga School District, and the teachers, a project was born, the template and paint ordered, and a map created. 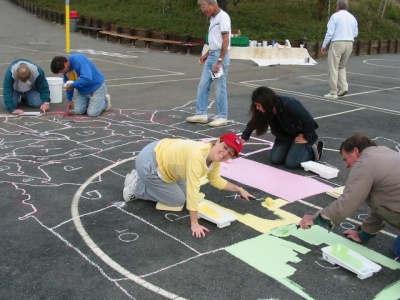 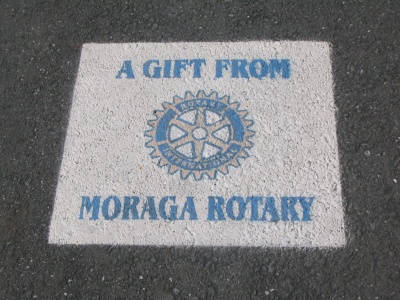 In keeping with our focus on the schools in our community,  we have painted a US map on the Los Perales, Saklan School, and Donald Rheem school grounds.  We added a new one at the Transition Learning Center. 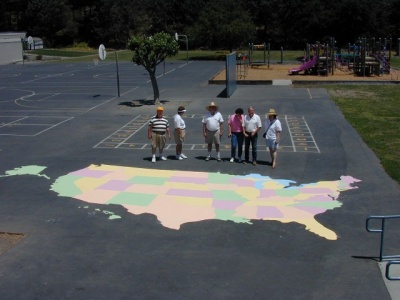 The Transition Learning Center is located in San Pablo, California, and is the last educational stop for children with behavioral problems in kindergarten though high school.  The school exists in 7 portable classrooms located behind another school facility.  The teaching staff is committed to providing students with the academic and behavioral skills required to reason, communicate, and live with dignity in a literate society.  Moraga Rotary has taken on the TLC as a special project, in keeping with our mission of making children better citizens of the world.

Our first project was to donate a Leap Frog Learning System, a computer based system to teach reading and geography, especially for younger children.  Next we funded the installation of an internet service to all 7 of the portable classrooms.

Then, one brisk Saturday morning, a team of over 40 Rotarians and friends descended upon them and worked all day to repaint the exteriors of all 7 classrooms, brightening up the whole place for the returning students on Monday.  Teachers and school district staff also turned out to help. 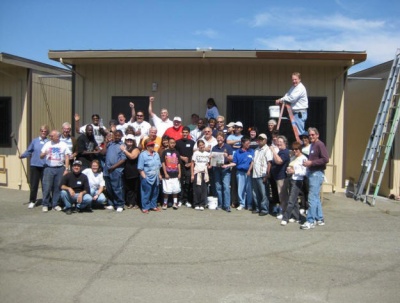 We donated weight lifting equipment, benches, a rowing machine, exercise machines, floor mats, plus indoor table games so the children have a place to play and work out during rainy days.  In addition, we provided outdoor equipment for the sunny days.

Every year in October, Moraga Rotarians began the process of creating 300+ Christmas Stockings for all the children incarcerated in Juvenile Hall in Martinez.  We began by cutting red and green felt in the shape of large stockings.  Next the members took them home and sewed them into stockings.

Then on a Saturday in November we met in a conference room at Juvenile Hall with a dozen girls that the hall assigns to us.  The artistic skills of the girls come out as we began to decorate all the stockings with colorful glitter glue.  Their initial fears and shyness evaporates quickly as the seasonal joy begins to fill the room.

The next step in early December was a club stocking stuffing party followed by a pot luck dinner with Rotarians, spouses, Interactors from Campolindo High School, and Odyssey of the Mind team members.  We created a long assembly line where we filled the stockings with hotel soaps and shampoos, small toys and games, socks and hair bands, playing cards, and then we topped them off with leftover Halloween candies.

The final action was we took all the stockings to Juvenile Hall on Christmas eve for distribution.  But in addition, we provided over 90 dozen cookies to give to everyone at the hall.  For some of the children, these simple gifts were the only presents they received during the holidays.  Moraga Rotary brings joy in a very simple way to kids who want to know someone cares about them.

On September 13th, 2005, fifteen Moraga Rotarians, along with  Eilidh Tait, our youth exchange student from Scotland, came together at a local hall to make fleece blankets for the people affected by the Katrina hurricane and subsequent flooding.  Together we prepared 50 blankets for distribution through the local Houma Rotary club in the affected area.  As  a byproduct, we weaved together the remnants to make fleece play toys for the cats and dogs at our local animal shelters.  In total, the Moraga Rotary Club raised $2,900 in club member contributions, $10,000 in community donations, and an additional $500 in Red Cross donations.  The contributions provided 3500 pounds of dehydrated food products, and a number of ShelterBoxes, each one providing shelter, sleeping bags, cooking utensils, and water purification tablets for ten people.

In 2010, we donated 2 ShelterBoxes to the victims of the earthquake in Haiti, providing shelter, sleeping bags, cooking utensils, and water purification tablets for ten people in each.  In 2012, Moraga Rotary donated over $2,000 in relief aid to Hurricane Sandy victims in the East.  And in 2015, we donated 2 ShelterBoxes with living supplies for 20 to the victims of the earthquake in Nepal, and in 2016 Moraga Rotary shipped 2 ShelterBoxes to Ecuador after a horrific earthquake struck that nation.  In 2017, we donated $4,000 to the North Bay wildfire victims, and sent another ShelterBox to Families in Puerto Rico after the hurricane.  We have also funded Families Without Borders and World Hope Corp. in Uganda.

Using local Rotary clubs in the areas of the disasters as our contacts provides the means to get the most out of a donated dollar, with 100% of the all the contributions actually going to the relief effort on the ground.